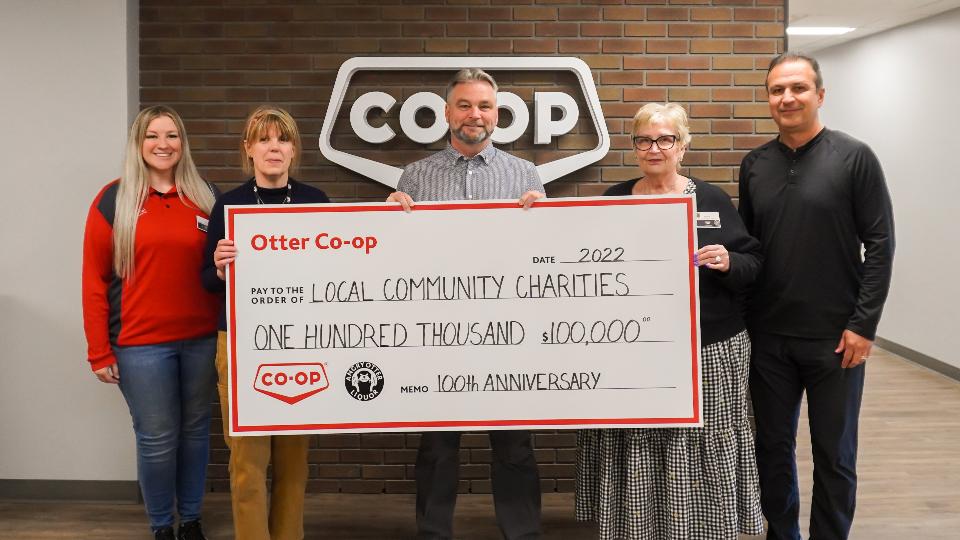 You don’t turn 100 every day, so when it happens, it’s definitely cause for celebration.

And when you’re a community organization founded on a philosophy of giving back, you just know those celebrations will involve some significant community-minded events!

That’s why Otter Co-op kicks off its 100th anniversary festivities this month with the announcement of a $100,000 donation to local community organizations!

Over and above the more than $400,000 Otter Co-op already contributes each year through donations, sponsorships and scholarships, in honour of their milestone, they’re inviting organizations across the region to apply for one of 100 cash donations of $1,000.

“In addition to our regular giving back to the community, we are also excited to be able to do an additional $100,000 this year, spread over 100 community groups. Spread the word and have your favourite non-profit group submit an application for their opportunity to share in the additional funds. We are excited for the future of Otter Co-op, and look forward to the next 100 years serving the communities in which we live, work and play in,” says Jack Nicholson, CEO

Grant applications will be open from June 20 to Sept. 30, with successful recipients contacted in October, in time for a big anniversary celebration.

Of course, this is just the start of the festivities.

A spring “Member-abilia” contest collected photos and stories for a digital photo album that will be shared on Otter Co-op’s Facebook and Instagram every #flashbackfriday. Throughout the year, you’ll find special 100th anniversary contests and special savings at the Co-op’s retail locations, and be sure to stop by the deli to pick up a gorgeous, 100th anniversary wooden charcuterie board, designed and hand-crafted by the residents at Wagner Hills in Langley.

And while you certainly don’t need Co-op membership to shop with Otter Co-op, it definitely brings rewards! For just $10 for a lifetime membership, use your Co-op number when purchasing gas, fuel, groceries, liquor, agriculture supplies and more, then once a year, you’ll receive cash back and equity, based on your annual purchases.

Locally minded and community invested based on core company values of integrity, community and excellence, Co-op is a 100 per cent, member-owned Canadian company, with sales of $375 million and community sponsorships and donations of more than $400,000.

Learn more today at www.otterco-op.crs or stop by your local store.